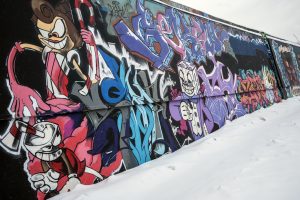 If Winter begins when the mercury huddles near the basement of your thermometer then this year The Old Man took the long way back.

On February 2 the temperature nosedived and never pulled up. It was -40C in Edmonton and inexplicably colder in every other direction.
I had to get outside.
More years than not I lived in Canada’s Arctic and still consider it home, even though the last 15 have seen my mail sent to Alberta.
Not since early childhood have I wanted to be outdoors in frigid temperatures. Snuggled in several layers of clothing and a snowsuit, I remember the very cold air as an exhilarating force. Beyond stinging skin and aching toes I had no concept of it being dangerous.
When I was just old enough to be bundled up and outside in -40 weather, temperature was measured in Fahrenheit. In one of those quirky coincidences that happen when humankind measures Nature, metric and imperial thermometers converge, and both Celsius and Fahrenheit are the same temperature at 40 degrees below the zero mark.
Kind of like how a thousand cubic feet of natural gas equals a million BTU, and a gallon of water is 10 pounds.

Anyone on the sidewalk was either puffed up in shiny new winter coats breathing steam and waited for a bus, or wore every grubby layer they possessed, and plotted their next sojourn, deliberate and slow, through the heated warrens and walkways of the downtown core.

Checking my extremities for hints of the relentless chill, I angled for the river valley, away from the living and their hollow stares. The cold does that. Survival does that. There was only one thought and everyone had their own version of it. Warmth.

Along the way I had stopped and started several times, photographing anything that looked worth a shot. Checking my watch, I gauged the rest of my route against the start time of the movie I was bound to see. Not too late, I marched across barren parking lots and through the legislature grounds and made for the Southside of the North Saskatchewan river.

Error validating access token: The session has been invalidated because the user changed their password or Facebook has changed the session for security reasons.
Scroll UpScroll Up